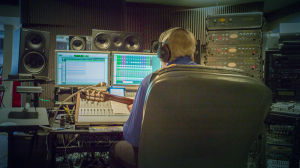 Read an interview with Bill Purse about his new album.

The title Tribute is a sonic tribute to Duquesne University faculty, students, family and alums. Tribute is also a turning point where I decided to be my own A&R representative. Finding outstanding new works for Tribute rather than composing all of the material myself.

I was blown away by Jeremiah Gregg’s composition and subsequently his groups performance at his senior electronic composition recital at Duquesne University. I immediately asked for permission to record the composition with Jeremiah and his exciting rhythm section. Making this track the start of my A & R work for many of the tracks included on Tribute. David and Goliath has the feel of a 70’s Jazz Fusion with its intense unison lines. 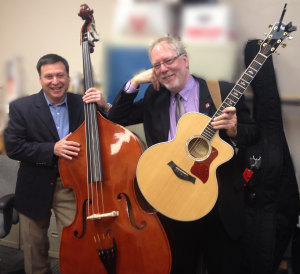 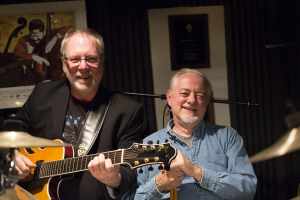 I wrote Sir George in 1985. The composition has been performed and recorded by Jim Farquar, Aergo, the Duquesne University faculty guitar ensemble Catch 22 and Adrian Galysh, but I have deep attachment for the song and wanted to add my own version. 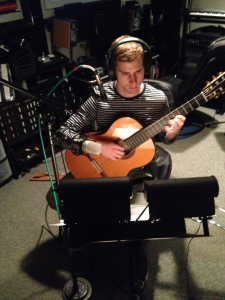 I have been working on a series of duets as a tribute to Aaron Shearer, his wife Lorraine, and Shearer protégée & publication editor Thomas Kikta. Lorraine always called Tom “Saint Thomas,” but I added the initial “K” so as not to confuse it with Sonny Rollin’s jazz standard Saint Thomas. It was fun to record this work with my former graduate assistant Francis DuBois. This is the second part of a trilogy composed for the Shearers. 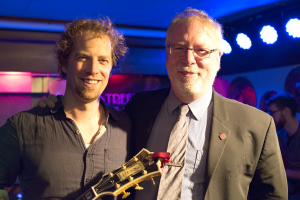 When I heard this piece live at one of Colter’s quartet performances I fell in love with it. When I got Colter’s CD Fool’s Resolution, I played the track over and over again. I was interested in recording this work with a nylon stringed guitar and enlisted Jeremiah Gregg’s rhythm section to complete the ensemble. I also enjoyed playing the harmonics behind Jeremiah’s first solo to simulate a Fender Rhodes on the guitar. The 5/4 intro and interlude alternates with an involved chord journey with beautiful melody on top. Thanks, Colter. 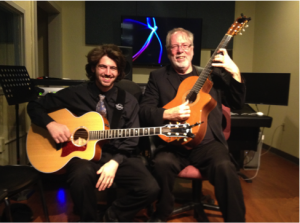 Ryan named his composition Syzygy, which refers to an alignment of three celestial objects, such as the sun, the earth, the moon or a planet. The musical composition picks up this theme because it is based on eight bar phrases that repeat in a minimalistic way, with reoccurring loops and new musical material appearing via a looper pedal. Ryan and I split the guitar parts but I made sure he did the hammering/tapping interlude, which he does so well. 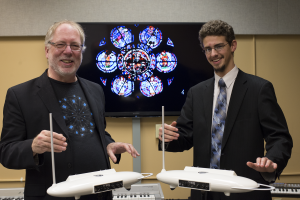 I was asked to play this composition on the Theremin for Aaron Sproul’s junior sacred music recital. As composer Joe Jenkins was my composition teacher and a musical hero of mine, I’m sure he would approve of my re-imagination of his organ work. The vocal quality of the Theremin and Switched On approach to the orchestration make it a haunting and sacred listening experience. Bravo to Aaron, and I dedicate this selection as a Tribute to Joseph Wilcox Jenkins. 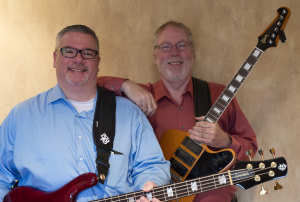 “Keith” is perpetual root motion piece for the guitar, which can also be played as a solo work. The addition of Jason on electric/synth bass added propulsion, as did the wonderful flute work of Don Aliquo doubling the melody. Don’s solo over extensive modulations make this a fitting musical interpretation of my enjoyment of Keith Richards’ guitar style and a musical tribute to his autobiography Life. 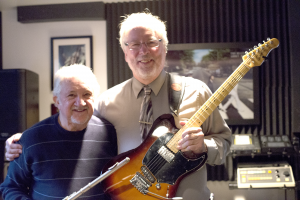 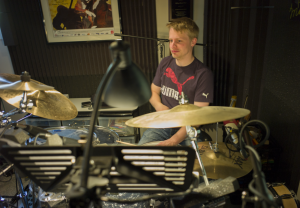 Reappearance is a composition from the 1980s, arranged here for a concert for the Duquesne University Electronic Ensemble. In this live version arranged by Ronuel Viera, I play the melody on the Moog Theremin. I loved this approach and adapted Ronuel’s work for the CD. There are four Theremin overdubs for the solo with fretless guitar and E-bow touches. It is trickier to play than it sounds, alternating between 12/8 and 11/8 rhythms for the entire work with a nod toward minimalism.

Woman In The Meadow 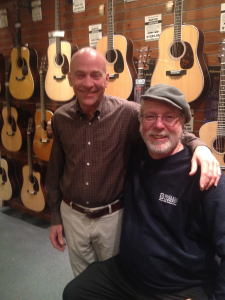 Mark and I had a composition class with Dr. Joseph Wilcox Jenkins in our undergraduate days at Duquesne University’s Music School and we were assigned to write a modal composition for the class. I wrote Opening Road (recorded on the CD Sonic Art featuring Sean Jones) and Mark wrote The Woman In The Meadow. I got the music from him immediately after and have played it on solo guitar since then. While preparing this CD I brought the music to Mark for permission to record. He had forgotten about this wonderful song, gave me his blessing and enjoyed hearing my rendition. 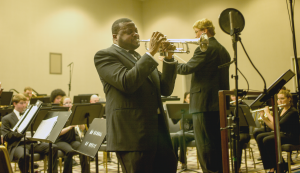 I have always loved to do musical scores signifying places and people I have known while living in Western Pennsylvania. Allegheny Sketches is an example of work written for Duquesne University’s Wind Symphony, directed by Dr. Robert Cameron. This live performance features the outstanding artistry of Sean Jones and was recorded in concert on October 2014.

A Pittsburgh nod to the Bernardo Bertolucci movie, this movement has a Latin feel that opens with a simple rock opera rhythm. It also features a flamenco style melody stated in the trumpets and later in the sax chorus, with opportunities for Sean Jones to showcase his prodigious trumpet improvisational skills.

Inspired by the nickname given to the monument in the center of PPG Plaza by a local newspaper, this movement is a set of variations that start out with solo muted trumpet. It then builds and expands into a tutti climax with trumpet improvisations soaring over the wind symphony and percussion.

At a Steely Dan concert a few years ago, Walter Becker commented to the audience that the avant-garde piano solo played by one of their sidemen sounded like “Hindemith runs amuck in Harlem.” I altered this wry comment into a hometown friendly version and used it as a starting point to compose the third movement in the style of Hindemith. While it tips its hat to the blues in the rhythmic breaks sprinkled throughout the movement and the virtuoso trumpet cadenza, it is written with quartal harmony and a relentless Habanera rhythm, which combine to create a unique finale to Allegheny Sketches.

Special thanks to Billy Kuhn and Jason Hoffman for Drum Set and Electric Bass additions. 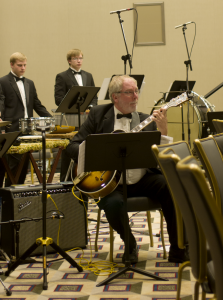